Hanna has been trained more than raised her whole childhood, trained like a dog. Erik has taught her to be stoic and how to fight and not how to handle her emotions or how to be a kid. Her childhood has been cut short. Once she got out in this strange world she needs to find who she is and for Hanna she’s lucky to have a friend to help her through it. Some of her human qualities and ideals are different from everyone else so she won’t know how to act or deal with her everyday life problems unless she finds out who she is, so who is Hanna Heller?

Hannas darker side isn’t hidden and she will kill you if she needs to. Hanna will learn her boundaries with hurting people but she will always be very subtle with her feelings. Her walls are going to be very high and tough to break down but deep down she’s a sweet girl whose only scared to feel all these emotions that are flooding in her mind about this new world. Hanna could be considered as a “cold blooded killer” but not because she’s evil, but because it’s the way she was raised, to adapt or die. Her father wanted her to be stoic and not show any emotion but since she his a teenager he knows she’s bound to feeling some type of feeling. When she’s with her friend, she isn’t aggressive or harmful to anyone, she is herself and quite caring. Throughout the movie Hanna becomes more aware that she doesn’t always have to hide her feelings and people want her to show emotion. She finds herself in an existential crisis without even knowing it, she has her feelings coming out but she was taught that was “wrong”

Sophie, her only good friend is someone who she admires the most and who she will learn from, like a mentor. Joe Wright directed this movie so the first good person she meets is Sophie, Hanna’s guardian. Sophie is like Hannas angel because she helps her in more ways that they know. She helps her not only fit in with everyone else but she shows her how to feel and what its like to have a true friend. Hanna has never had a friend her whole life, so when Sophie waltzes in her life Hanna doesn’t know how to make friends. Sophie realizes that there is something different with Hanna the moment she sees her, Sophie says she’s “ Abnormal” and that’s what she likes about Hanna. Hanna having a close friend like Sophie is a part of finding who she is because it gives her someone whom she can be herself with and someone to learn from.

Hanna has been created to be a superhuman and she’s supposed to be “fearless and pitiless” but she still has her own doubts and fears. Throughout the movie, Joe wright put in little hints of these feelings that she gains throughout her adventure. She faces friends, boys, witches and the truth. The way Hanna dealt with the Spanish boy isn’t a normal reaction he would normally get but her first instinct was to defend herself and not let down her guard. Her feelings towards Wiegler the witch is a bigger feeling defense, she wants to save herself and her father. Her feelings toward the truth of her whole existence are her most harmful ones, She was bound to find out the truth and when she did she flipped out. Her whole life was a lie and everything was told in one moment, all these feelings coming at once. Who she thought she was, was wrong.

Hanna has found out a lot about herself through her journey, but most important she’s found out who she is not. She knows she isn’t normal, she knows that Erik isn’t her biological father, but she will always remember him as her father through love. She figured out that she will never be normal, that to fit in she needs to learn a lot. She will move on and be strong. She has always been independent and responsible with her actions and will continue to be, with or without Erik. Joe Wright definitely wanted to portray Hanna as a leader, she was technically born to be one. She would be a great leader because she is very motivated and will do above and beyond what she wishes to do. She has a passion for the her goals, she makes them an obligation and strives for them. 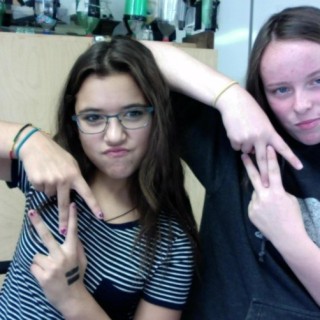