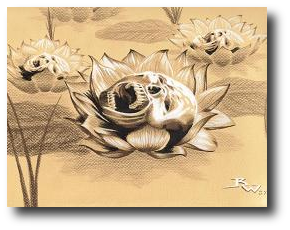 And knowing that to this sunken place all the dead had come, I trembled and did not wish again to speak with the lotos-faces. . .

I hate the moon — I am afraid of it — for when it shines on certain scenes familiar and loved it sometimes makes them unfamiliar and hideous.

It was in the spectral summer when the moon shone down on the old garden where I wandered; the spectral summer of narcotic flowers and humid seas of foliage that bring wild and many-coloured dreams. And as I walked by the shallow crystal stream I saw unwonted ripples tipped with yellow light, as if those placid waters were drawn on in resistless currents to strange oceans that are not in the world. Silent and sparkling, bright and baleful, those moon-cursed waters hurried I knew not whither; whilst from the embowered banks white lotos-blossoms fluttered one by one in the opiate night-wind and dropped despairingly into the stream, swirling away horribly under the arched, carven bridge, and staring back with the sinister resignation of calm, dead faces.

And as I ran along the shore, crushing sleeping flowers with heedless feet and maddened ever by the fear of unknown things and the lure of the dead faces, I saw that the garden had no end under that moon; for where by day the walls were, there stretched now only new vistas of trees and paths, flowers and shrubs, stone idols and pagodas, and bendings of the yellow-litten stream past grassy banks and under grotesque bridges of marble. And the lips of the dead lotos-faces whispered sadly, and bade me follow, nor did I cease my steps till the stream became a river, and joined amidst marshes of swaying reeds and beaches of gleaming sand the shore of a vast and nameless sea.

Upon that sea the hateful moon shone, and over its unvocal waves weird perfumes breeded. And as I saw therein the lotos-faces vanish, I longed for nets that I might capture them and learn from them the secrets which the moon had brought upon the night. But when that moon went over to the west and the still tide ebbed from the sullen shore, I saw in that light old spires that the waves almost uncovered, and white columns gay with festoons of green seaweed. And knowing that to this sunken place all the dead had come, I trembled and did not wish again to speak with the lotos-faces.

Yet when I saw afar out in the sea a black condor descend from the sky to seek rest on a vast reef, I would fain have questioned him, and asked him of those whom I had known when they were alive. This I would have asked him had he not been so far away, but he was very far, and could not be seen at all when he drew nigh that gigantic reef.

So I watched the tide go out under that sinking moon, and saw gleaming the spires, the towers, and the roofs of that dead, dripping city. And as I watched, my nostrils tried to close against the perfume-conquering stench of the world’s dead; for truly, in this unplaced and forgotten spot had all the flesh of the churchyards gathered for puffy sea-worms to gnaw and glut upon.

Over these horrors the evil moon now hung very low, but the puffy worms of the sea need no moon to feed by. And as I watched the ripples that told of the writhing of worms beneath, I felt a new chill from afar out whither the condor had flown, as if my flesh had caught a horror before my eyes had seen it.

Nor had my flesh trembled without cause, for when I raised my eyes I saw that the waters had ebbed very low, shewing much of the vast reef whose rim I had seen before. And when I saw that the reef was but the black basalt crown of a shocking eikon whose monstrous forehead now shown in the dim moonlight and whose vile hooves must paw the hellish ooze miles below, I shrieked and shrieked lest the hidden face rise above the waters, and lest the hidden eyes look at me after the slinking away of that leering and treacherous yellow moon.

And to escape this relentless thing I plunged gladly and unhesitantly into the stinking shallows where amidst weedy walls and sunken streets fat sea-worms feast upon the world’s dead.