My teacher has given us a project to use the thing that we got and make really anything with them and you can get more items if needed and so I’ve got two 4×4 squares, a heart, a sign, one pencil, 15 cubes, and some cardstock.

Part: 1 The 4×4 Squares. What I did was make a city skyline with the square I only used one. The first thing I went out to go find a good skyline picture so I seared up City Skyline in Black and White. Then after some digging, I would find this city. 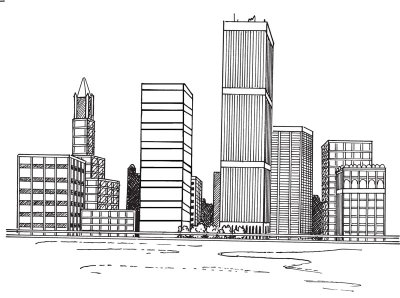 The next step was to put this into adobe illustrator. Doing this is by putting the image on the desktop and then go into adobe and login and then make a letter go to file and place the image into the artboard the show the guild and put them on making a rectangle in the four corners of the rulers and curve it by 10cm. then color it red. Then this will go off to the teacher for printing.

so then after 7:11 seconds, it would be finished and then it would look like this

So this one is actually not my idea it’s a fellow classmate who had the idea. what she did was when looking for a heart design and found a family tree on a heart and with some help from the teacher she had her family tree printed on both sides of the heart. then the day after I kinda took her idea merely because they had the heart ready and so first we print the design but first the setting to print the design is this

now put it on both sides then tape the heart next I’d place my family names on the tape and then the teacher will set up the setting that is right below.

then just take the tape of the heart it would look like this below.

Then it’s was finished.

So this one was a lot longer than it need to be but how this when was.

First, I when on the net to find a star and after a little digging, I found this star that works.

then after some finicking, I had it on adobe but then we ran into the problem of the size of the cubes. The cubes are 1cm cubes and in the GlowForge 1cm is just a little too big and so it won’t print so we have to take out the crumb tray but it’s too far apart. So we didn’t know what to do but then the teacher made some lift blocks and just used one of the lift blocks and a 4×4 square as a bigger area we could make the star on the cubes.

After this it was done printing it looked pretty good and that would be how I made the cubes here is what they look like after they were taken out.

The cardstock was different so first what to get the tree so I search cartoon Christmas tree and the thing is that I cant use some normal one with a stump or something that would make two different parts because I needed to be as big as possible so I found this tree that was perfect but had one little problem there was the little upsidedown arches that would be cut when we would print so we had to do a little bit of image tracing and it looked good. Now I “had” so extras little things that would be added on to the trees but the ones I had wouldn’t work of because some caps would be cut off anyways so we got some new ones to replace the other. Now on to cutting and for future me whatever you do if you want to cut stock paper or cardstock HAVE THE POWER AT LEAST OVER 50. If the power is lower than 50 it won’t cut the paper merely just write a little but don’t have it max power because the paper will burn and make some ember. So after it was all cut ten were made into cards because that was all the paper we had on hand I would show you the finished product but I don’t have any pics of the card but just imagine a red card with a gree tree with yellow blue silver little ornaments on the tree and that would be the cards.

The last two things that I made with some help and that I have forgotten to write about so we start with the pencil and the one that was pretty simple so how this was made was by first the teacher pencil making thingy… it just a piece of cut plastic to fit the pencil about I thing 9 or 12 at a time so we set that up to put the pencil in face down like that writing that already from the manufacturer yea that side down and what he would do is that when looking down at the pencil from the computer he can add some text that would be engraved into the pencil and I believe that I said something like “Ho Ho Ho Merry Christmas” or something like that and then everyone else and then we let it run and in 5 to 8 minutes they were done. Now the sign this I not gonna lie this one was kinda rushed and I was out of good ideas like it went like “they we need some idea for the sign” “I don’t know um how about a car related to Christmas or something” “yea sure that will work not the most impressive thing but it will do” and just like that was how I got to put a car on a sign and I mean it a nice car it’s like one of those old chevy cars that you would see in every 60s mafia film or any show that has that diner with the checkered floors red seats with the silver trim there would be one park in the lot or a pic of one in a frame near the bathroom or kitchen by and it that but with a tree on the roof and saying Merry Christmas at the top. So then it was printed on the sign and here the finished product.